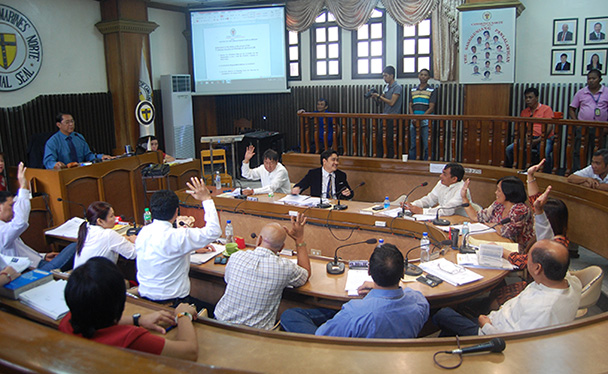 Vice Governor Jonah G. Pimentel should tell his colleagues at Sangguniang Panlalawigan to refrain from   talking infront of the media regarding the issue of the re-opening of the case of Mayor Agnes Ang before the SP enbanc if he himself (VG) do not want to discuss it in public or he has no official statement on it yet.

I heard over his interview with Jun Quibral at PBN-DZMD last Wednesday morning, when one texter asked “if it is true that they are going to revive the admin case of Mayor Agnes D. Ang of Vinzons”, sagot ni Vice Gov, … “nangunguna pa sa desisyon yang texter mo…” where in fact it was Board Member Pol Gache who mentioned it to the media when Kadamay Ronald Molina of PBN-DZMD and Ricky Pera of Bay Radio reported it to their respective radio stations quoting Bokal Gache that it is really being considered by the SP to re-open the case despite of the cease and desist order from the court. Pinag uusapan pa lang naman daw…

Even other Board Members mentioned it to CNNews that it is really being considered by some of the members of SP and that they are alrerady decided not to participate on it if the case will be pursue. Kung sakali lang naman daw.

However, Vice Governor Pimentel said that the issue will be discussed at the SP session on Tuesday, May 13, 2014, on its regular session.   He said that there is no decision yet from the SP and it will depend on the consensus of the council whether it will be re-opened for their verdict despite the court’s order.

May 13, 2014 mapaguusapan sa SP regular session. But let me share my predictions lang naman… Board Members Canlas, Malubay, Jerez, Lausin and Quibral will surely disagree on the reopening of the case. But don’t worry, predictions sometimes do fail.  But if you guys think all the rest will go for the pursuance of the case, we are not sure this time…. If I were the Member of the Provincial Board, I will think not only once, nor twice but so many times just like maybe I think they are doing now.

I still salute the Sangguniang Panlalawigan for being so calm despite the big controversies being discussed and filled before them… the Cereno VS Ang Case, the CANORECO issue, the Mining Issue not to mention the daily political issues they are facing from the day after they won the election.

The CANORECO issue is a one big point for them (SP). Congratulations! I am pretty sure the move of SP will continue, to serve and to seek justice for us, member consumers. Please do not stop, people are counting on you. If there are some persons from CANORECO who really need to face charges, why not?! But of course, sabi nga ni Vice Governor Jonah Pimentel, they will listen to them first, dun sa mga taong nababanggit sa alleged irregularities on the NEA Audit Report. Im sure may mga paliwanag sila kung bakit sila nalagay sa ganung sitwasyon… or maybe may ibang hakbangin ang SP tungkol dyan for the benefit of the consumers. Aabangan din po namin yan… Marapat lamang din na hindi na patulan ng SP ang laman ng resignation letter ni dating Board President Engr. Jet Fernandez kaugnay sa “political accommodation” dahil hindi nga naman sila ang pinatutungkulan nito. Parang may pasaring lang naman sa kanila… palipad hangin ba!

I still look up to the Sangguniang Panlalawigan. We have no choice but to leave this matters to them. I still look at them as true and sincere public servants just like what people expect them to be, after giving them the sacred mandate. Hope they won’t fail us!