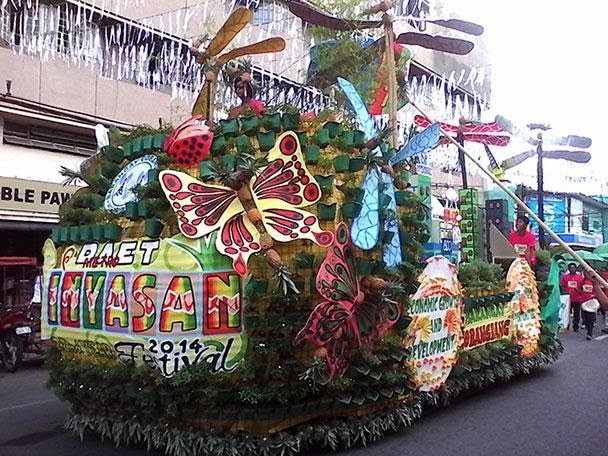 Last June 15, the longest running festival in Camarines Norte – Daet Pinyasan Festival started its ten day festivities. Already on its 22nd year, this festival which is a brain-child of Mayor Tito Sarion of Daet aims to celebrate the 431st Foundation Day and Town Fiesta of St. John the Baptist Parish of Daet. It also aims to put Daet in the tourism map of the Philippines and the world. This time netizens from Daet are encourage to promote the festival online by using the #Daet, #PinyasanFestival2014, #daetonthego in all their posts in social networking sites like Facebook.

A wide selection of events and activities we lined up to showcase the best that Daet can offer to people with varied interests and lifestyles. Different sets of guests per day were carefully selected to inspire Daeteños and serve as good example like Ricky Lee, Director Rory Quintos, and MMDA Chairman Francis Tolentino. This is also the time that Daet recognizes the contributions of its citizens in various sectors.
To kick off the celebration, a Thanksgiving Mass was officiated by Fr. Rainier Abaño at 1st Rizal Monument Grounds, followed by Floral Offering to Rizal monument led by guest of the day, Regional Director Maria Ong-Ravanilla of Department of Tourism. Bahay Anihan Agro Fair was also formally opened to the public wherein the 25 Barangays of Daet showcased their agricultural produce and native delicacies. In the afternoon, a Dog Show was held at CN Agro Sport Center and the anticipated opening parade from Central Plaza Mall to Eco Athletic Field. It was participated by various civil society organizations and Barangay officials.

June 16 – Is the opening of the Photo Art Exhibit of Daet Society of Art Enthusiasts at Daet Heritage Center. It is a venue for Daet’s artists to showcase their talents and invite art collectors to support their works. The latest landmark of Daet – Pineapple Fountain located infront of Daet Elevated Plaza was inaugurated and blessed together with the opening of Pinyasan Party Nights.

June 18 – The highlight of this day was the Awarding of Dangal ng Daet. This award is given to Daeteños who showed exemplary achievement in their field of expertise. Other events of this day include Pinyasan Got Talent which aims to discover the talents of Daeteños in performing arts, Pinyasan Little Angels, Tertulla de Daet, a night for Daet’s senior citizens, and Best LGU Practices Sharing Conference.

June 20 – This is the most star- studded day of the Pinyasan festival because of the search for Miss Pinyasan. Among the stars who graced this occasion were Diana Zubiri, Will Devaughn, Roxanne Barcelo, Andy Smith and Ping medina. Other events in this day were Opening of Bicol Cities and Municipalities Sharing, Metro Daet Cup Inter Barangay Basketball Tournament.

June 21 – The highlight of this day was the highly anticipated Pinyasan Street Dancing Competition. As usual it never failed to gather a huge crowd. Other events include Tattoo competition, Dart Tournament and capped by Pinyasan Star Express and Fireworks Display.

June 22 – It started with Fun Run, then Horseback Racing competition, Dart Tournament, Laro ng Lahi, Script Writing Workshop with Ricky Lee and The Barangay Night which includes the Awarding of the 10 Outstanding Tricycle Drivers of Daet a search spearheaded by camnortenews.com.

June 23 – This is when the 4th Mayor’s Cup Pinyasan shootfest, Pinya Kulinarya, Bicol Dance Sports and the awarding of Awarding of the Best Pinyasan Souvenir and Pinyasan Garden competition.
June 24 – This day is the Daet Fiesta in honor of Saint John the Baptist where a Pontifical mass was celebrated and officiated by Bishop Gilbert Garcera, DD.

Next year, 2015, Daet will host the Gayon Bicol Festival of Festivals as confoirmed by Mayor Tito Sarion. This huge regional event will be the first ever in Camarines Norte. This was agreed upon during the recent 17th Bicol Cities and Municipalities Sharing Conference attended by the City and Municipal Mayors in Bicol Region held at the Pineapple Resort.

On his Closing message, Mayor Sarion expressed his gratitude and appreciation to all Daeteños whom he believed to be behind of all the success of the said festival, especially, all the members of the committee including Municipal Tourism Officer Marco Paulo Delfinado as the overall chairman.

Here are some of the results of the different events during the Pinyasan Festival:

(Note: Photos and other results of events are on the earlier posts in this web)