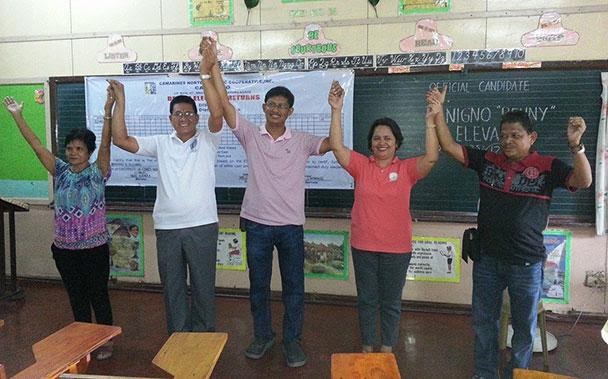 Engr. Benny Elevado during his oath taking and proclamation with Mayor Tito Sarion immediately after the 2 ½ hours of election at Daet Elementary School last July 5, 2014 for Daet North District Board of Director.

Engr. Elevado was declared winner after reaching the 125 votes. According to the election rules of CANORECO, unopposed candidate should cast atleast 100 votes, for him/her to be declared as an official winner.

Present during the election were Ms. Neri V. Rieza, DECOM Chairman Antonio N. Olfindo, Secretary Melicia A. Ibasco, Mrs. Gilda J. Manaog, ISD Manager Efren Belgado And  some employees of CANORECO.
Hundreds of voters still on their way to the polling place but were not able to cast their votes after it was closed as early as 10:30AM on that day.

Elevado is an Electrical Engineer, graduated at Mapua Institute of Technology and happily married to Dra. Janine Cabanela-Elevado and blessed with 2 kids.

Also being the Manager of ABS-CBN Daet, Elevado considers his new post as another challenge to him as a leader and policy maker.

Elevado will serve as a Board of director of CANORECO until 2016 for his first term.