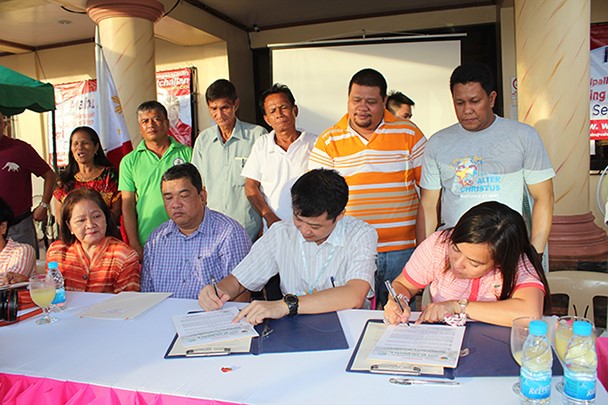 Saturday, September 6, 2014 LGU Vinzons and the City of Valenzuela signed a sisterhood/twinning agreement held at the Municipality of Vinzons, Camarines Norte.

It is in accordance with the Valenzuela City Resolution No. 505 entitled “ A Resolution signifying the Interest of the City of Valenzuela to Establish Sisterhood/Twinning Negotiation and Relationship Agreement with the Municipality of Vinzons”.

The said twinning mutually desires to promote favorable relations of partnership and cooperation between them and their constituents. Both recognize the importance of implementing the principles of equality and mutual benefits.

Mayor Agnes D. Ang is expecting a lot from the twinning with the one of the progressive city of Metro Manila, Valenzuela, especially in terms of economic aspect, livelihood and as well as the good and friendly relationship, that would benefit both its constituency.

Cong. Sherwin Gachalian also expressed his honor and gratitude as his home city to be one of the Vinzons, Camarines Norte’s twin sister. He mentioned to support and help the Municipality of Vinzons by promoting its local products and tourism destinations of Vinzons wherever he may go as he visit other towns and cities of the country.

On that same day, Municipalities of Labo and Jose Panganiban also signed the same agreement.