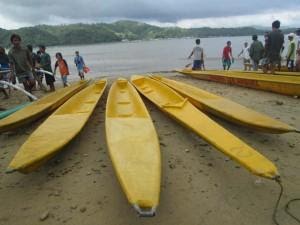 One of the highlights of the celebration of the 13th Mambulawan Festival was the conduct of the 1st Mambulao Bay Regatta last October 7, 2014.

This event was conceptualized by Mayor Dong Padilla and Vice-Mayor Ariel Non together with the Sangguniang Bayan of Jose Panganiban in order to promote water sports that would eventually highlight the exquisiteness of Mambulao Bay as well as showcasing the true richness of the municipality — the people of Jose Panganiban.

The said event was chaired and facilitated by Coun. Artem Andaya Jr., Co-chaired by Coun. Casiano Dilao and assisted by the Bantay Dagat Crew.

The regatta demonstrated and tested the strength and agility of the paddlers during the race.

Participants came from the different barangay of Jose Panganiban, including the IP Tribe from Brgy. Osmeña.

Spectators and visitors coming from Jose Panganiban and other municipalities enthusiastically and patiently watched and stayed the whole day to witness the first ever Mambulao Bay Regatta.

The enjoyment and fulfillment of the paddlers were best seen whenever they reached the finish line….

and it’s indeed a priceless moment…

Once again, the Mambuleños truly proved their tourism campaign that tourism promotion should start within themselves and they are proud to say… Mambuleños are truly Turismo, Tayo Mismo!